He remembered that he had often before felt like this, often before thought these thoughts, had these fears. In all the good, fruitful, and ardent periods of his life, even in his youth, he had lived like this, had burned his candle at both ends, with a half jubilant, half mournful feeling of wild extravagance, of burning himself up, with a desperate greed to empty the cup to the dregs, and with a deep, hidden dread of the end. Often before he had lived like this, often drained the cup, often burned with high, darting flames.

Klingsor recognised the contradictions within himself between youth and waning maturity, between weakness and strength, between artistic certainty and personal doubt. He is visited in the second chapter by his only real friend, Louis, another famous artist like himself, living for the here and now, similar to Klingsor in his pursuit of pleasure and the avoidance of the baggage of life. Klingsor knew his friend well but was still drawn to revealing his self doubts to him. They pained him, they demanded sympathy.

Klingsor made it a practice to reveal his heart to his friend, and realized too late that in so doing he was losing him. As the summer advances, Klingsor loses all relationship to the immediate needs of life around him, eating, sleeping at set times and drinks to greater and greater excess as he paints using bright summer colours more and more earnestly. Hesse sums up for us in many different sensory descriptions the Italian countryside at this time of year, here for instance Monte Gennaro, with shapes and shadows, with rock glistening and air shimmering, the blues and greens, I can almost see it.

Between it and themselves the vast areas of shimmering air, and lost in infinite depths the narrow blue arm of the lake, resting amid the green flames of the forest. But we are aware of his recognition of the autumn to come, the season of course but also the autumn of his life, he was an artist who gained energy and creativity from his exuberance, but if he could no longer keep up this way of life would he still be an artist, would his art have any meaning?

He questions himself and his own futility more and more.

Is there freedom of the will? Can you, astrologer, guide my stars differently?

What were all these sheets smeared with color for? Why all the toil, all the sweat, all the brief, drunken lust of creativity? Was there redemption? Was there tranquillity? Was there peace? As his life slowly disintegrates before our eyes, we are left with the understanding that he recognises partially what is happening to himself, revealed by the understatement in a final letter to his friend Louis.

The final chapter describes his self portrait carried out at the end of the summer in question, the portrait is itself a huge contradiction, it contains all of his experiences, where he comes from, his dreams and so many other things. But he built up the head majestically and brutally, made it into a jungle idol, a jealous, self-infatuated Jehovah, a totem to whom firstborn babes and virgins might be sacrificed.

Those were a few of his faces. Another was the face of the doomed and decaying man who accepted his fate: moss grew on his skull, the old teeth stood askew, cracks ran through the white skin, and scales and mold grew in the cracks. Yet at the same time.

What can I say,? The banal, this is a wonderfully written story we are pulled along with, we float with his protagonist through this his last summer buoyed up by the magnificent description of the passing of this short time illustrated by the colours and shapes, the characters and the encounters as well as the doubts and the loneliness of the artist.


Klingsor made my skin crawl. But I loved the descriptions, the way he paints with words. Like Like. I was able to distance the two in this case. Wonderful Hallmark.

A Child's Heart , written in January , in Basel, concerns the transmutation of a boy's innocence into knowledge of good and evil, and the painful guilt that accompanies this process. Both Klein and Wagner written in May-June , immediately after the arrival in Montagnola and Klingsor's Last Summer written shortly after are set in a southern landscape that reflects Hesse's life that summer; both novellas have heroes who are more or less Hesse's age at the time; and in both the hero's death is preceded by a grand vision of unity in which the polarities of life are resoluved.

Hesse exposes himself mercilessly in Klein and Wagner , a story of escape, wrenching loose, letting go. 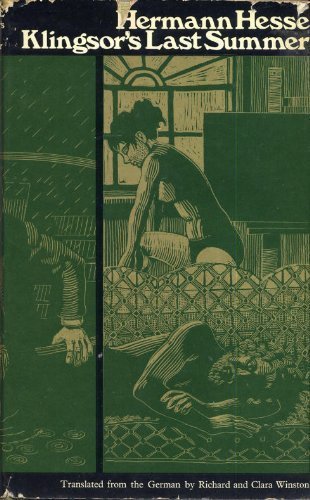